skip to main | skip to sidebar

The Least of These II

In the midst of a heated discussion – we never quarrel – Jo Anne has been known to reach over and pull off my air hose for a brief moment or two just as I am about to make my winning argument. My son Mike, the judge, would undoubtedly say this is an obvious case of "Quad Abuse." I have thought on these occasions that maybe this was going to be my "Last Lecture" in mortality.

Years ago at BYU the University sponsored a lecture series entitled "The Last Lecture," which I was fortunate enough to attend. Prominent people in various disciplines and careers were invited to come to the campus and speak to the student body as though it were to be the last public lecture they would ever give.
Many of you have also undoubtedly heard of Randy Pausch, a professor of computer science and human-computer interaction and design at the prestigious Carnegie-Mellon University in Pittsburgh. Diagnosed with pancreatic cancer, which would prove to be terminal, he spent the last year or two of his life delivering what he called his "Last Lecture." He eventually had a book published with the same title that became a bestseller. It was a distillation of all he felt was important in his life that he wanted to pass on to his young children, former students and colleagues, and many others as well. He passed away at the relative young age of 48.
I believe "The Last Lecture" concept is most valuable. It has made me think over the years what I would say, especially to my own family, were I to deliver to them my final words regarding what I felt to be most important for me and for them.
As I have thought about this concept, I wondered if the Savior had given a last lecture, and if he had, what last message did He leave with us? What message would capture the essence of his mortal ministry and eternal mission?
I believe the answer to those questions is found in the Gospel of Matthew wherein Matthew records the Savior's last public lecture. Of course we know that Jesus spent some sacred time teaching precious truths to his Apostles during and after the Last Supper, prior to entering the Garden of Gethsemane,
According to Matthew the Savior's last public lecture is recorded in chapter 25 of his Gospel. In this last lecture He taught three parables, all of which pertain to His Second Coming: the Ten Virgins, the Talents, and the Sheep and the Goats. I believe that It is the parable of the Sheep and the Goats that captures the essence of who He is and what he would have us do and become as well.
In the parable, when the king, who is the Savior, returns to judge the nations "…he shall set the sheep on his right hand, but the goats on the left. Then shall the King say unto them on his right hand, Come, ye blessed of my Father, inherit the kingdom prepared for you from the foundation of the world:" [25:33-34]

We all know why the Sheep were called the "blessed of the Father," and would inherit the kingdom prepared for them from "the foundation of the world." They had simply followed the example of Christ in giving selfless service to others –"…Verily I say unto you, Inasmuch as ye have done it unto one of the least of these my brethren, ye have done it unto me." [25:40]

And who were the "least of these?" They were the sick, the hungry, the naked, the thirsty, the stranger, and even those in prison. In one sense we are all strangers, naked, hungry, and thirsty; the "least of His brethren." We all are in desperate need of his infinite love and mercy manifest through the Atonement.
His "last lecture" to us I believe is that the most important thing we can do in our lives is to follow His example of unselfish service. President Monson in addressing the BYU student body recently challenged them by saying, “An attitude of love characterized the mission of the Master, He gave sight to the blind, legs to the crippled, life to the dead. Perhaps when we [face] our Maker, we will not be asked, ‘How many positions did you hold?’ but rather, ‘How many people did you help?’ In reality, you can never love the Lord until you serve Him by serving His people." [From Elder Oaks 2009 April Gen. conference address] 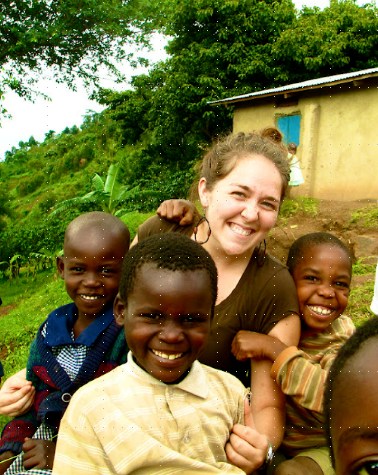 Our 20-year-old granddaughter, Kelsey Rushton, the son of Rich and Lara, for those of you who know our family, has taken to heart the words and example of the Savior, as well as the counsel and example of a living prophet, seer, and revelator. She, along with 19 other young adults went to Uganda, Africa at the beginning of May to spend four months serving some of the "least of these" in small villages in the rural areas of Uganda. This selfless service undertaking is sponsored by a nonprofit organization called HELP International. It is nondenominational and its sole mission is to provide humanitarian service and aid to some of the least of these our brothers and sisters in Africa and throughout the world. Kelsey and her friends have worked with children in orphanages, have built a health clinic out of mud/adobe bricks they helped to make, and have served the people in these villages in many other ways as well. It should also be noted that they have had the opportunity to river raft and take a short Safari. Kelsey's blog, "Kelsey's summer in Africa," (some of you may want to check it out – very inspirational) is overflowing with gripping pictures and expressions of the joy and fulfillment she is receiving in having this experience of serving others in this way. I know that it will impact her life forever. Parenthetically, her younger brother Trevor, who is a senior in high school this fall, was able to organize and implement an Eagle Scout project which included raising funds and gathering together soccer equipment that he subsequently was able to take to Belize (a country adjacent to Honduras in Central America). He was able to give the equipment, including soccer shoes which are hard to come by in that country, to impoverished young kids, and work with them to improve their soccer skills. I believe that Trevor, like his sister, has experienced the joy of giving selfless service to others. It will have an impact for good on him, and hopefully will just be the beginning of selfless service which he will continue to give in the mission field and throughout his lifetime.

Of course, we don't need to go to Africa or Central America to serve "the least of these." I love what Mother Teresa of Calcutta said about having devoted her life to selflessly serving the poorest of the poor and the very least in their society in India. She taught that “one thing will always secure heaven for us—the acts of charity and kindness with which we have filled our lives. “We can do no great things, “only small things with great love.” [From Elder Oaks April conference address, 2009]
I think of mothers who do countless small things with love for their little babies and children. I believe that these small acts of kindness and charity, which "never faileth," will surely "secure heaven for them." I also think of my wife, family members, and many good friends and caregivers who have done so many small things, and with love, for me over the years. I frequently say I have been kept alive for 23 years, paralyzed and on life support, by love., The nagging thought I have in my mind at times is if a beloved family member or friend were in my situation would I do for them the small things, and with love, that must be done on a daily basis to provide them with the highest quality-of-life possible? I wish I knew the answer to that.
“He who lives only unto himself withers and dies, while he who forgets himself in the service of others grows and blossoms in this life and in eternity." [Gordon B. Hinckley]
Dad/Grandpa/Jack
Posted by Jack Rushton at 5:53 PM No comments:

Jack's book, "It's Good To Be Alive-Observations From a Wheelchair" is no longer in print. You may be able to purchase a new or used copy on Amazon. Click on the following link: http://www.amazon.com/Good-Alive-Observations-From-Wheelchair/dp/1599554089

It's Good to Be Alive

This is an excerpt from "It's Good to Be Alive." To buy the full DVD see below.

$15 each (includes shipping and handling)

It's Good To Be Alive CD

Jack Rushton, a respected religious leader and educator, has been loved and admired by many over the years. He is known, not only for his leadership skills and devotion to his beliefs and family, but also for his amiable personality and sense of humor. Jack is now known by thousands for his stellar example of how to move on and continue to achieve fulfillment through service and inspiration despite unfortunate injuries.

On August 1, 1989, while enjoying an afternoon with his family in Laguna Beach, CA, Jack body-surfed a small, seemingly harmless wave towards the shore. Unexpectedly, the wave drove him into the sand head first. Since that day, he has been paralyzed from the neck down and respirator dependent.

From that day to this, Jack Rushton is even more influential and inspirational than before. His cheerful attitude, amidst such a trial, has helped others reach beyond themselves and become great as well in the process.

A group of church members pitched in time, talent and resources to build a beautiful addition to Jack's home to meet his special needs. And then, there is his wife, Jo Anne, who serves him day and night - washing, dressing, feeding him, and attending to all of his highly specialized needs. Even though Jack is dependent on those around him for much of his physical needs, he still retains the sharp mind and loving spirit that has carried him through his life. All that is Jack remains unchanged.

Jack Rushton's resilient attitude, combined with service and zest for living, has proven to edify everyone around him. He inspires others to readjust their attitude about their present situation, whatever it might be.

Jack and his wife Jo Anne are the parents of six children and 17 grandchildren. They reside in Southern California and in spite of their challenges, truly believe "It's Good to Be Alive!".